Everything you need to know about SaaS ARR and MRR growth

Get monthly executive SaaS marketing advice in your inbox 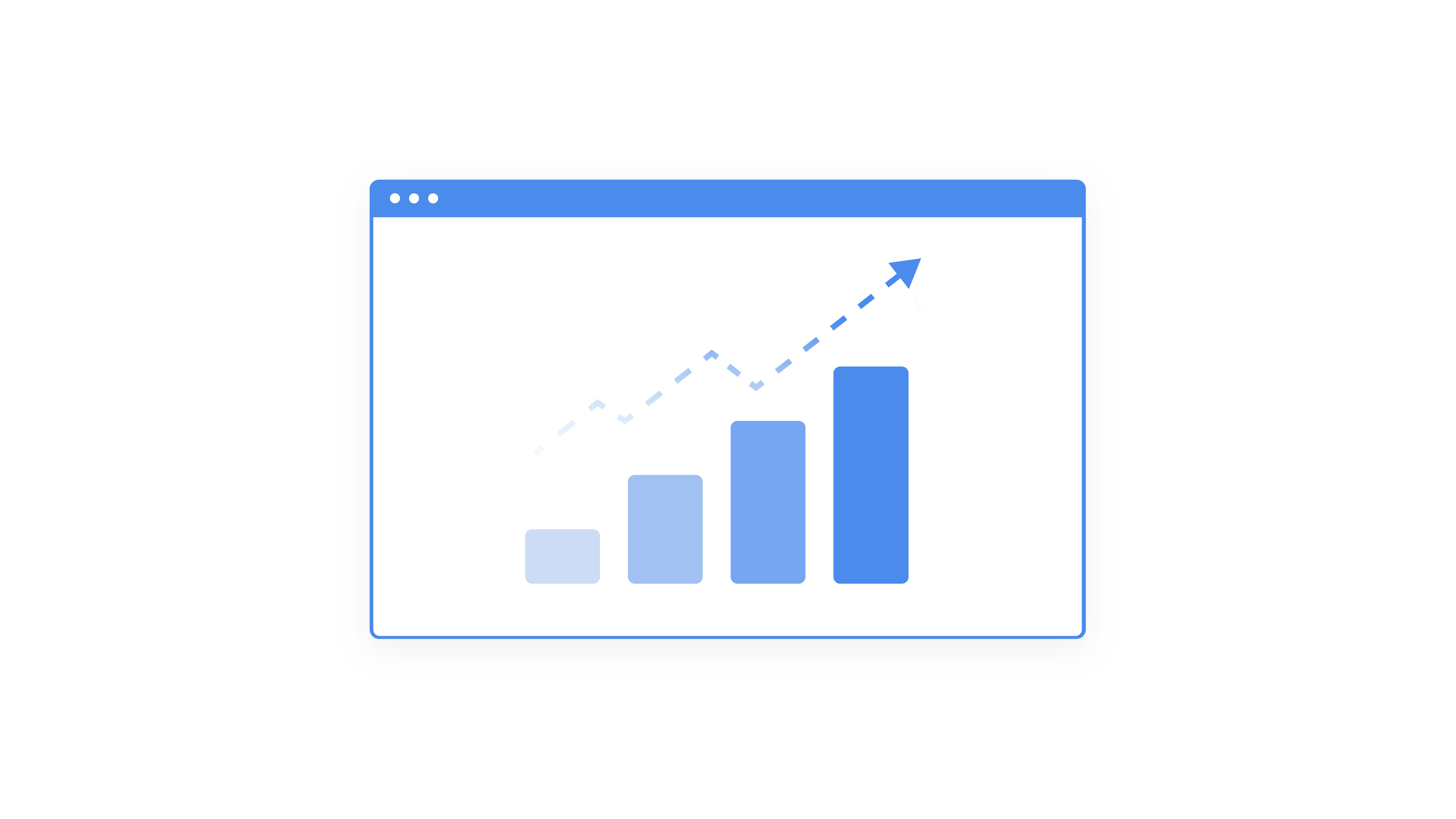 Whether you're a CEO looking to grow their business or a college student studying for a test or a marketer looking to broaden their horizons, welcome to your one-stop-shop for all of your B2B SaaS ARR growth questions.

Let's start with a quick review of the vocabulary we'll be using today so we're all on the same page.

What is ARR in SaaS?

Annual Recurring Revenue (ARR) totals the value of revenue earned by your subscriptions in a year. ARR is often used in valuation conversations (ARR multiples as an investment valuation tool) as opposed to MRR, which is more often used as an operating metric.

How to calculate ARR in Saas?

A simple Google search will yield all sorts of answers. For our purposes today, we care more about the concept of ARR and ARR growth than the accounting and calculations aspect.

The most important tip here is to make sure that you clarify with everyone else which definition/formula you're using and to stay consistent with it.

To get you started, you can use the following:
Number of Paying Users x ARPU = ARR

Another tip, keep in mind the distinction between 'booked/earned/contracted' revenue and 'acquired/received/cash-in-bank' revenue.

In short, keep in mind that any ARR talk is more about metrics and decision-making. If we're talking accounting, let's stick to GAAP (if in the USA) revenue definitions.

SaaS companies aren't in the software-selling business; they're providing a service. A software-backed service, usually delivered over the internet.
That means customers expect onboarding and customer support, as well as updates and ongoing improvements. In return, a SaaS company gets a more stable and long-term revenue stream (but needs to ensure it doesn't veer too close to becoming a professional services company).
This is worth highlighting because the worst mistake you can make is only focusing on one or two metrics and forgetting about others. The recurring nature of subscription-based revenue involves multiple parts that are all worth optimizing. Without getting into the accounting specifics, we can break down Profit into Revenue - Expenses.

Revenue can be split into New sales and Recurring revenue.

Expenses can be split into Customer Acquisition Cost and Cost to serve.

What is a good ARR for SaaS?

Benchmarks can be useful as long as they're understood in context. When asking what a good conversion rate is or good funnel metrics are, you have to remember that metrics like that depend on time, place, industry, and a whole host of other factors.

That said, there is a benchmark you can try to compare yourself against. Salesforce may be the most popular example of this. 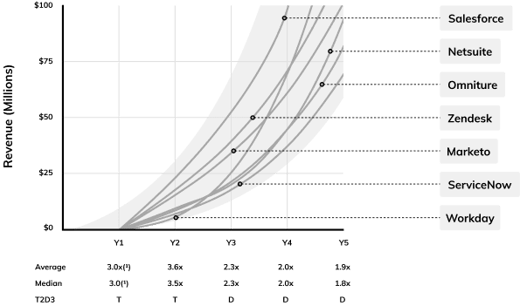 You may have heard the term T2D3 before. T2D3 refers to the growth trajectory that the most successful tech startups follow. They all Triple their ARR two years in a row then Double their ARR three more years in a row, resulting in $100M ARR and landing them at the $1B valuations coveted by investors everywhere. But hitting that hockey-stick growth figure is hard, which may be why you're here reading this. So let's dive in!

A viable SaaS enterprise goes through four distinct growth stages. Each stage focuses on specific KPIs that are most important to the company's growth at that particular point in time.

First step is getting a working MVP that's usable and useful. Get people to test it, like it, and hopefully talk about it. At this stage, you want as many users as you can get to help validate your business idea and reach Product-Market Fit.

This stage ends once you hit PMF.

Before you can really starting spending on marketing, you have to confirm you've reached product-market fit. This checklist is a good place to start. The idea is to validate your GTM hypotheses by getting raving early adopters that pay and stay, who vote not only with their time but also with their wallets, and who ultimately close out the last step in the flywheel by bringing in more people themselves.

This is where we start really caring about ARR!

Once you've hit PMF, your next priorities are about scaling up and growing. Enter ARR growth.
A lot of tech companies ignore profitability early on in order to build an important user base. A lot of them may have churned, most of them had a CAC that was higher than their LTV, etc.

Once you've hit PMF, the timer starts ticking. The most successful companies hit $100M in ~5 years from confirming PMF. After years of growth-focused scaling, it's time to start cashing in. Profitability growth sounds a lot like ARR growth, but the big distinction is that we're moving from increasing positive metrics to decreasing negative ones.

B2B SaaS companies are selling an ongoing service after all. Growth will eventually start to plateau. The law of diminishing marginal returns dictates that past a certain point, efforts in a new area will yield greater results than equal efforts in the area you've already been focusing on. After years of improving customer retention, demand, and growing ARPU, the next best things will be to optimize CTS, CAC, and eventually go back to your first positioning and Ansoff exercises, revisit your SOM, and finally expand your ICP.

Lastly, once ARR and user-acquisition growth start to slow down, make sure that profitability keeps up. As long as profit and growth continue adding up to 40% or more, you'll be in the clear.

If you've skipped straight to this section, just remember the main takeaway: ARR growth must be approached holistically by focusing on different factors at different times of your growth journey.

ARR growth tip #1: Understand all the factors at play

ARR growth tip #2: Map your ACV to the right Go-to-Market 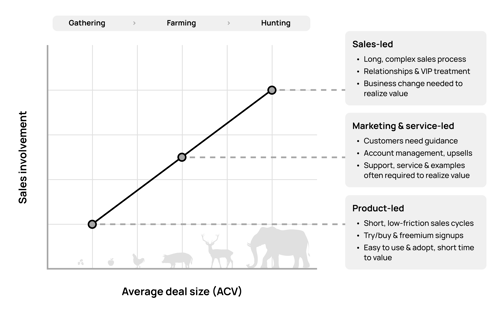 ARR growth tip #3: Improve the quality and quantity of your MQLs

No two ways about it. No MQLs, no sales, no revenue. You hit PMF, you confirmed your ICP; you have permission to spend marketing dollars. The question is where and how. You have so many options!

The SaaS world loves an acronym, so say hi to your new go-to SaaS sales & marketing acronym glossary for quick checks during your next standup.

The most important SaaS metrics to watch for B2B companies

Keep an eye on these important SaaS metrics in 2022 to make strategic marketing and business decisions for your B2B company.

5 SaaS startup metrics to look at [with formulas]

Learn the key metrics that you need to keep a close eye on to determine the overall health and growth of your SaaS startup.

Get notified on new marketing insights

Be the first to know about new B2B SaaS Marketing insights to build or refine your marketing function with the tools and knowledge of today’s industry.